Bonefish are impressive predators in their own right, but many of their natural attributes make them equally impressive at avoiding capture when pursued as prey.

From their reflective scales to their incredible sense of smell, these fish have challenged many an angler indeed. Following are four little known facts about bonefish that you should know before heading out for your next bonefishing adventure.

Despite the massive amount of interest that these fish have generated throughout the years, bonefish largely remain an enigma. Their reflective scales make bones highly adept at blending into their surroundings, which makes it difficult for many people to spot them on the flats. From certain angles, it can be nearly impossible to determine which direction a bone is facing and swimming in. One simple tip to ensure a flawless presentation of the fly is to search for a thinner, swaying tail at one end, and thick shoulders at the other. Although bonefish remain on the move, they aren’t able to swim backwards. This makes it much easier to determine exactly where a bone is heading.

There Are 9 Different Bonefish Species

For many years, it was believed that there was just one species of bonefish throughout the world. Now, however, at least nine species of this fish have been identified. Given that the appearance of bonefish does not always vary dramatically from one species to another, genetic analysis has been heavily relied upon for determining the authenticity of newly identified species. Currently, there are three known species of bonefish in the Caribbean and six in the Pacific.

Their Teeth Are Called “Crushing Teeth”

While bonefish don’t really have teeth in the conventional sense, they do possess impressive sets of pharyngeal teeth. These are granular teeth that are posited along the upper jaw, the throat, and the tongue. They’re used for grinding and crushing food after it’s been snatched up.

Bonefish Have A Modified Air Bladder For Oxygen

Bonefish are capable of surviving and even thriving in shallow, brackish backwaters. This is due to a special, lung-like air bladder that allows bones to supplement the oxygen available in the water. By sucking air in and then retaining it, bones can breathe comfortably in low-oxygen waters like those of the mangroves and coasts. Because of this enhanced breathing ability, you can expect to find bonefish moving with the tides to take advantage of deep waters and increased oxygen at low-tide. When the tide is high, you’ll find them in the shallower regions of the flats, tailing for nutrient-dense food. 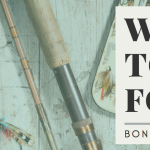